The olive trees have bloomed and grown.  Farmers are plowing around trees, mills are cleaned and audited and everyone is preparing for harvest to begin at the beginning of November.  The first look at the 2019/2020 production forecast has been released.

Most major producing countries are expecting a better year than last.  Greece’s official announcement was 240,000 MT with some forecasts as high as 280K – 300K.  Turkey’s estimate could increase to 250,000 MT.

Olive tree groves in Spain have experienced a long, hot summer.  A lack of rainfall in the spring has diminished the output to the lowest level since 2014/2015.  Estimates have the Spanish production forecast at 1,000,000 MT, down 43% to last year record-breaking harvest. 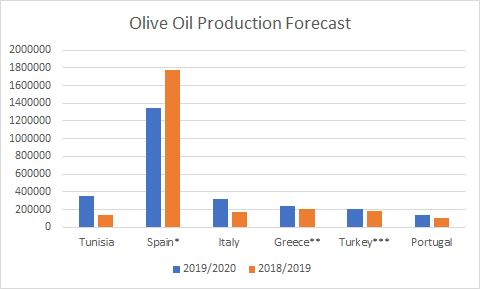 Until the beginning of harvest and during, these numbers could be affected by the amount of rainfall.  Too much rain right before harvest can affect the quality of the oil.

We will keep you updated as harvest approaches.